Submission Has No Barriers

Can a submissive be a marine, a surgeon, or a cop?

For years, I uniformed up for work. It’s part of entering the headspace needed for my job. Black undies and sports-bra, black spandex undershirt, dark blue finely creased pants. I stop and attach a badge to the outside of my uniform shirt and then put it on. Next is my hair, which goes into a tightly wrapped bun, plastered to the back of my head with several hairclips and a good dose of hairspray. Socks, clunky black, nicely-polished boots, underbelt, and then duty belt. I’d check my handcuff pouch, spare magazines, and holster my gun after assuring myself there’s one in the chamber.

Two years after becoming a police officer, our policy changed so we could wear outer Kevlar vests. Mine holds my Taser, flashlight, rubber gloves, two primary sets of handcuffs, and the most important equipment I carry—a pen and small notebook. I was fully in the zone and ready to hit the street as a beat cop.

The people who know me personally, also know I’m one tough bitch. I’ve gone up against four drunk men, alone with no back up, taser in my hand willing to pull my gun. Three backed off and one went to the hospital with a broken leg. Yep, I can back that story up, but my neighbor tells it better because he was on the ambulance crew.

But, there is one thing no one knew while I worked the streets… 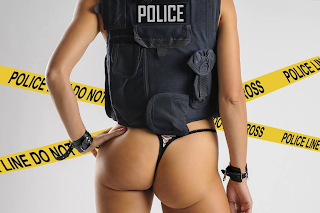 For years, I denied what turned me on. Thankfully, my marriage survived, and my husband/Sir is thrilled to dominate me sexually. My job has helped me understand more about human sexual behavior than I ever dreamed possible.

After years of training, I’m now a detective specializing in sex crimes. Am I good at my job? Hell yes, and I’m not just bragging. I’ve been to advanced training all over the country. I’m certified in forensic evidence collection, forensic child interviewing, and trained extensively in sexual deviant behavior in regards to serial sex crimes.

I’ve been strong and held back tears when I informed a mother her twin teenage daughters died in a rollover accident. I helped dig up the body of a sixteen year old, who was brutally murdered, hacked up and buried. I left the scene, picked up the suspect, and calmly interviewed him for two hours before he told me in details what he did and why. I never cringed over what he said, just asked, “What happened next.” I told my suspect I would make sure someone picked up his dog and cared for it while he was in jail. I didn’t get that confession by hitting his head against a wall, letting my anger control me, or begging him to tell the truth. I calmly explained that he needed to free his conscience. I don’t believe in good cop, bad cop. I believe in good cop, good cop.

To place anyone in a box and say they should or shouldn’t sexually behave one way or another because of their job is ignorant. I could talk to every victim of my solved sex crimes and tell them about my bedroom activities and they would tell you they don’t care. I solve cases, I put the bad guys behind bars, and I’m not the only sex crimes detective who does. We are a steady, controlled, party loving, brother and sisterhood. We can drink any other type of detective under the table. If my peers asked, I would tell them about my proclivities in the bedroom and they wouldn’t blink an eye.

I’m happy, well adjusted, and have a better marriage than any cop I know, 34 years and counting.

My husband/Sir will be the first one to tell you that I’m still a badass bitch. I’m older, larger around the belly and hips, not in nearly the shape I used to be but I’m proud of myself and what I’ve accomplished.

And… I’m proud to be submissive in the bedroom.

Posted by Cari Silverwood at 2:34 AM