Real-life poly menages: not all about the sexy.

I hear that one a lot. No, I'm not kvetching, believe me, but I think people form an unrealistic view of a real-life poly relationship based on what they read. It's not a fraction as sexy as in the books. LOL

For starters, Sir and I are, first and foremost, devoted to our spouses and our marriages. Those always come first, including all the real-world ups and downs. And we're both very busy people. He has an incredibly demanding, high-stress job, and works a lot of hours. I'm a self-employed workaholic writer who works a lot of hours.

Starting to form a picture yet? LOL

I'd say it's safe to estimate that 90% of our relationship has nothing to do with sex. And that's a LOW estimate. It might be closer to 95%. We're friends first and foremost. And yes, we do love each other. If we didn't, we probably would have killed each other by now. LOL Over 75% of our relationship happens via text messages or email, because of our schedules. And the time we spend together, a lot of it is usually in a vanilla context (we shoot skeet once a week with friends, and He might stop by for dinner one night a week and we sit in front of the TV and just talk).

We have to juggle schedules, and how we feel (He is prone to migraines, I have fibro) and then, once or twice a month, we might be able to fit in some sexy/kinky time.

Am I complaining? No, of course not. But if you write about that in a romance book, you won't sell many copies, will you? LOL

In the more than three years since Sir and I have been playing together, I can count on one hand with fingers left over how many times it's been a "menage" situation with Him and Hubby. And even then, that was more a scene with both of them topping me than it was "sexy time."

Here's the thing, we both have spouses who love us and trust us (key point) and know we have our priorities straight. They also understand we have interests that they don't have (kinky and vanilla). Instead of trying to force themselves to do what they don't like to do, they give us permission to go do them without them (again, kinky and vanilla both) and understand that when we come home, we come home happier, meaning our marriages are stronger in the long run for it. Meaning THEY (our spouses) are happier in the long run, because they are also free to pursue what they want without guilt of them holding us back, or resentment at forcing themselves to go along with us.

So yes, it's fun to write about all this wild and crazy smexy time with characters, but don't think everything I write is a reflection of what my sex life is like. LOL Because, believe me, in that regard, I'm pretty boring. :) 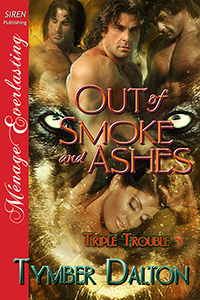 
Tymber Dalton has a new release out today: Triple Trouble 5 - Out of Smoke and Ashes

Get books 1 and 2 in the Placida Pod series for $2.75 each when you purchase Out of Smoke and Ashes! All items must be in the cart at the same time when completing the transaction to apply this special offer.

Elain Pardie’s wedding is interrupted when her matron of honor, Lina, goes into labor. Unfortunately, events spiral downhill from there for the Lyalls and their kin when an old foe refuses to roll over and play dead. As everyone suspected, Rodolfo Abernathy won’t give up.

What Abernathy doesn’t know is he’s become more prey than predator. Shifters with grudges of their own enter the fight with their sights set on Abernathy’s downfall.

When the fur hits the fan, it won’t be pretty.

While Elain and Lina struggle to cope with their new roles, various shifter Clans band together to fight their common enemies. Devastating heartaches are finally laid to rest as new love blossoms.

And Baba Yaga isn’t even done with them yet. Elain, Ain, Brodey, and Cail, along with their ever-growing band of friends and adopted family, must still confront those who’d gladly destroy all they love as evil and vengeance once again return from Out of Smoke and Ashes.

Note: There is no sexual relationship or touching for titillation between or among siblings.

Tymber Dalton is a Siren-exclusive author.

The correct order to read all of the Triple Trouble books and prequels is:


You can find all her Siren releases as Tymber Dalton, Lesli Richardson, Macy Largo, and Tessa Monroe on her Siren page at:

And you can find her on the web at: 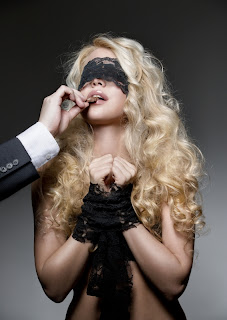 My wicked mind immediately raced to two things I've fantasies about. The first, having someone lay food on top of me, then eat it and the second, being used as a table by a sexy dominant. I can't explain either compulsion but for some reason they both turn me on. I've never included either in any of my books before because I was unsure how readers would respond. This time, I decided to throw caution to the wind and take a shot at writing both activities into my novella, All You Can Eat.

The research was fun...no, get your minds out of the gutter I didn't do activity, well yet anyway. In relation to food play, I discovered a practice called Nyotaimori. It's a subdivision of food play where sushi is served on a naked woman's body. I found the idea quite sexy. It seemed a classier way of engaging in food play instead of other forms of the play that can make a huge mess. It also enabled me to incorporate the aspect of objectification, i.e. having my Dom use my sub as a table, plate or however I decided fitted the characters personalities. I was faced with a couple of issues though if I wanted to make the story work.

Edible Delights Vol 1, featuring my novella, All You Can Eat goes on sale on Friday 17th through Secret Cravings Publishing. If you'd like to purchase it here is the link: Secret Cravings

You can also go in the draw to win a PDF copy of the book over at my blog (http://jangraham.blogspot.com.) my pre-release giveaway runs for the next 24 hrs and then there will be a second chance to win a copy if you drop back to the blog over the weekend.

He's a little excerpt to give you a taste of what you might win. 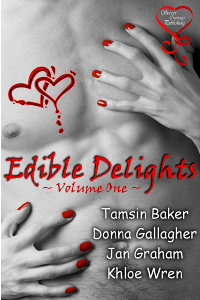 All You Can Eat - Excerpt.


Jai took the food from her and placed it on the daybed parallel to one of the pillows.
“I think I’d like to eat my salad at a table.” Kat looked perplexed as he patted the cushions on either side of him in turn. “Elbows here near the salad please and knees on this one.”
Kat continued to look at him quizzically, flicking her gaze between each pillow before meeting his once more, this time with a wide-eyed stare.
“You want me to lie across you and be a table?” Jai nearly laughed at the shocked expression on her face. A smile hinted at his lips as Kat remained kneeling at his feet.
“Yes, I need a surface to eat from and I can’t think of a more pleasurable one than you. So, elbows here with your knees there so you’re crouched low across my lap.”
“I can’t believe I’m doing this.” Kat stood, then knelt on the cushion to Jai’s left, stretched across his lap and placed her hands on the cushion to his right.
Jai ran his hand from her shoulder to hip as Kat lowered herself onto elbows, the line of her body appearing like a lazily stretching cat. He applied a little pressure as he moved his hand across her hips, just above the panty line. Kat lowered her bottom until her thighs rested close to her calves. Her breasts moved against his outer thigh as her stomach rested against his erection, causing him to groan low in his throat. Maybe this wasn't a good idea. If he didn't maintain control they wouldn't make it to dessert because he’d be the one begging for release. That was not his plan.
“You have the softest skin, kitty kat.” Jai smoothed his hands over her back and massaged her shoulders briefly, listening to Kat’s lust-filled moans. He slid his hands back down toward her ass, gently rubbing each globe before giving each one a light slap.
“Thank you, I like that.” Kat rubbed her body against his lap. He meant to drive her arousal higher than she could stand, not the other way around.
“Yes, so do I.” Jai slapped each check once more delighted at the little moan each one elicited from his adorable table. “Time to eat. Will I enjoy what you've prepared for me?” Jai placed one hand on her shoulder and the other at her hip to still her movement.
“I hope so, I’d like my reward. I really enjoyed the last one.” Jai scooped a portion of salad onto her back centering it between her bra and panty lines, then proceeded to pour the dressing across the top.
Kat giggled and began to wiggle as he tossed the dressing through the salad.
“Tables don’t usually laugh or wiggle, kitten.”
“The chili in the dressing makes my skin tingle, then you tickled me when you tossed the dressing though.” Kat continued to giggle as Jai began to eat.
He ensured the fork didn't dig into Kat’s delicate skin but also occasionally let the prongs scrap over her ticklish flesh, eliciting another round of laughter. This was the most delightful Thai salad Jai had ever eaten, especially considering he was sharing it with the sexiest woman, and table, he’d ever eaten off.
Jai ran the fork gently along Kat’s spine. Traces of dressing dotted her skin, a delicacy he wasn't going to leave unaddressed. He placed the fork on the empty platter, raised her up onto all fours by positioning one hand under her stomach and applying upward pressure.
Jai bent to whisper against her ear. “Reward time.”
Posted by Jan Graham at 8:11 PM No comments: